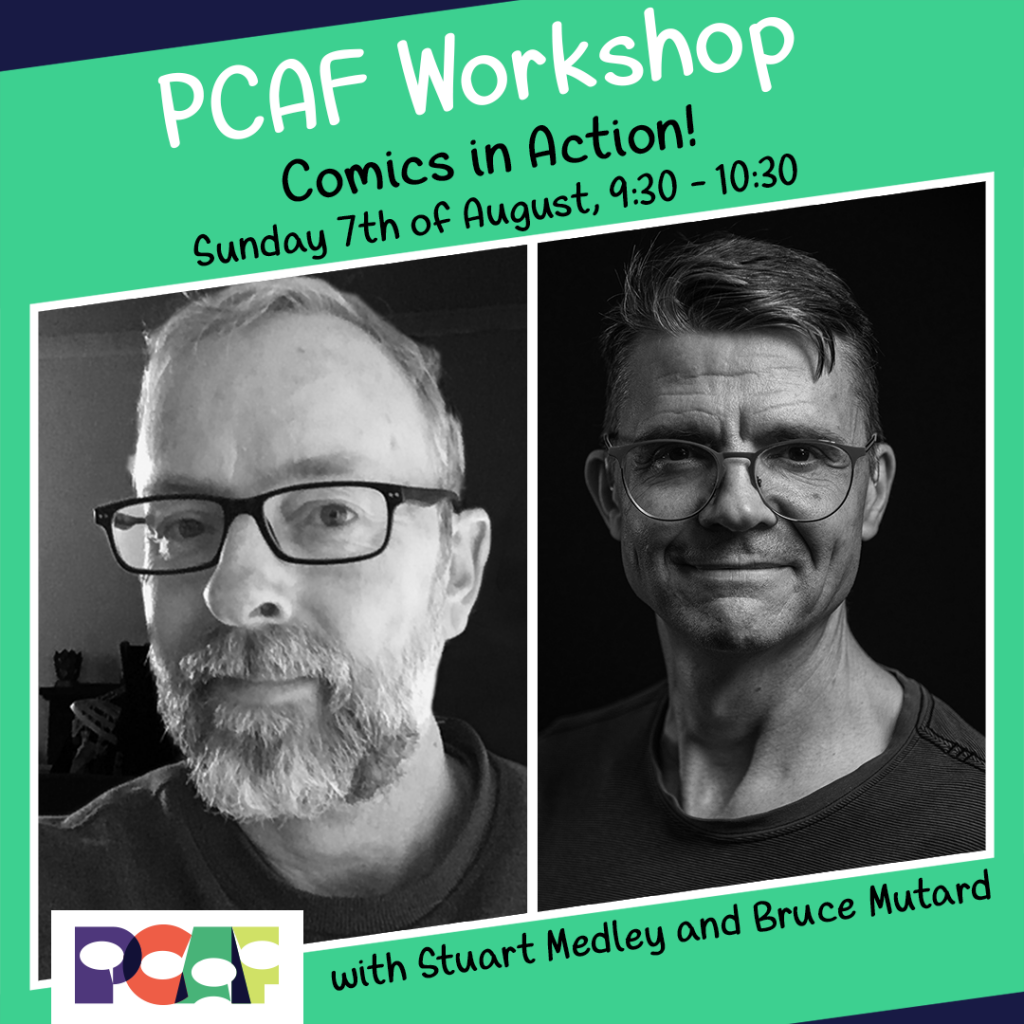 Comics are not just taking over the world, they’re also transforming it! Grab your pencils and discover how comics are changing the way we solve problems, interact with each other and think about the world around us.

Stuart Medley teaches drawing for design at Edith Cowan University, and makes comics and visual prototypes to help improve employment and housing services. He is a co-founder and Chair of the Perth Comic Arts Festival, and was a founder of [sic]BAG Comics in the 1990s. He is a partner and art director for Hidden Shoal Recordings, a critically acclaimed record label with a roster of international artists and clients including the Australian Broadcasting Corporation, the BBC and Showtime.

Dr. Bruce Mutard is a comics maker, publisher and researcher. His graphic novels include The Sacrifice, The Silence, A Mind of Love, The Bunker and Post Traumatic. His latest graphic novel Bully Me, was published as Souffre Douleur in France in 2019. He completed his PhD at Edith Cowan University with his thesis The Erotics of Comics, and likes to make comics as scholarship. He is director of the Comic Arts Awards of Australia and editor/publisher of the Australian Comic Annual. He has been a curator and program director at the Perth Comic Arts Festival. 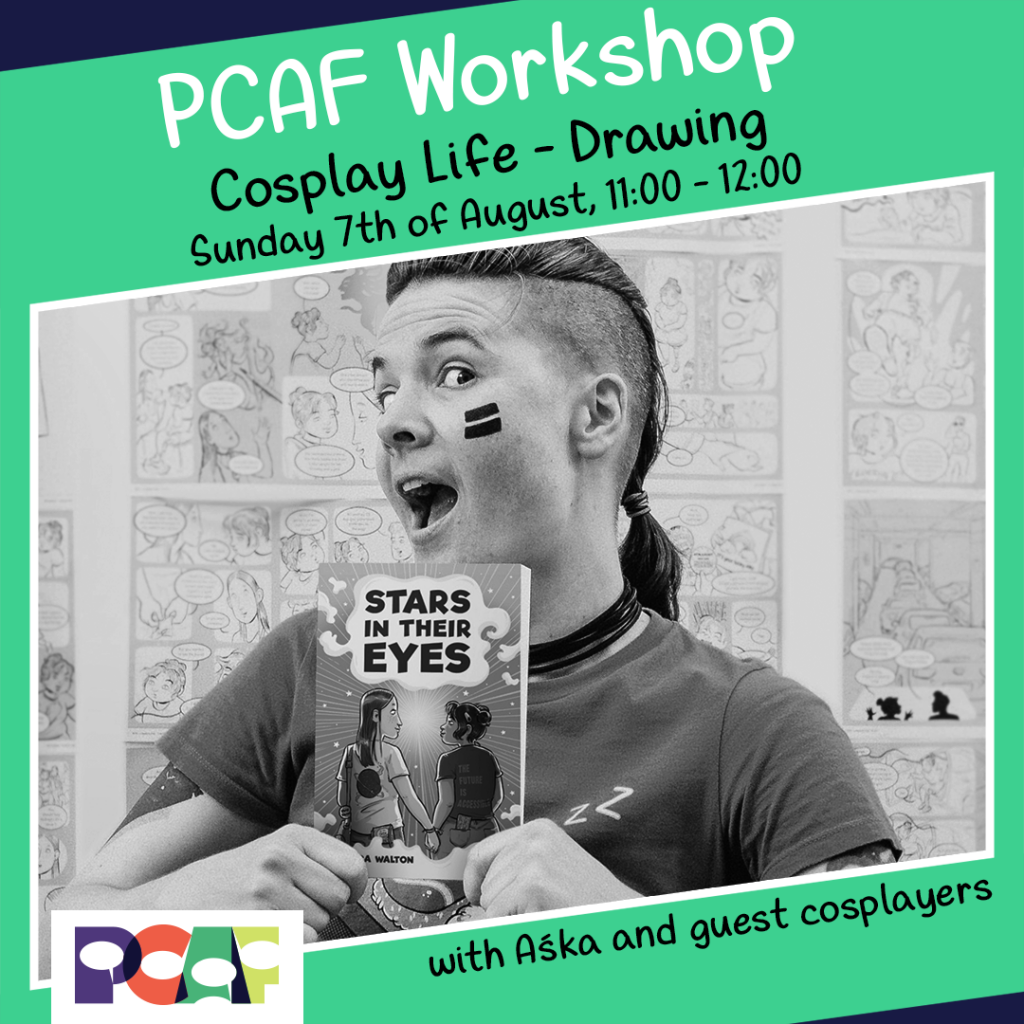 Join some of Perth’s most passionate cosplayers as you’re guided into the wonderful world of life drawing. You’ll learn the basics of figure drawing, costuming and rendering shape with light in this dynamic workshop.

Aśka is creative dynamite: a comic maker, an ex-quantum physicist, and a hugely engaging and popular presenter. Aśka is passionate about visual literacy and has published more than ten books and graphic novels. The most recent title, (with Jessica Walton), includes the CBCA Notable, ALIA Notable and CAAA Shortlisted YA graphic novel STARS IN THEIR EYES, which was bought by Scholastic US in 2022. 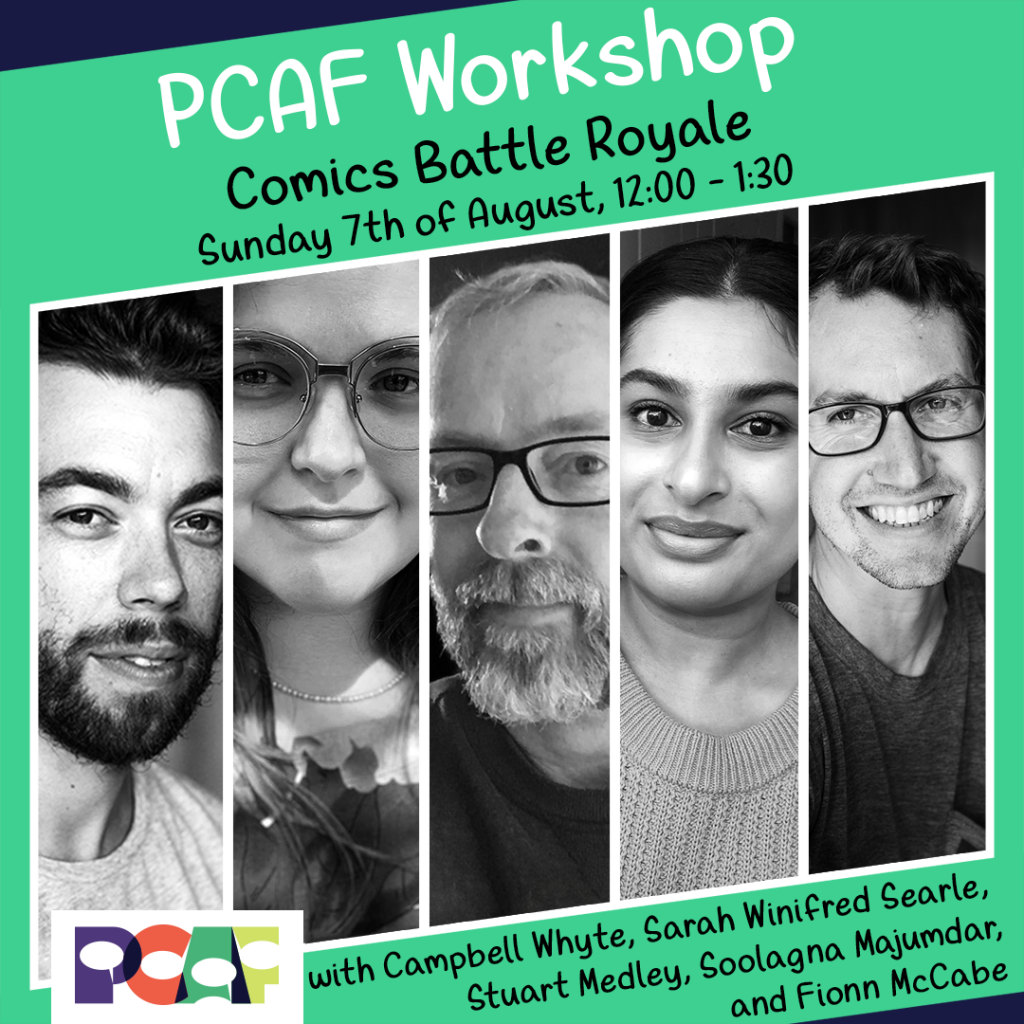 Four of Perth’s best comics makers battle it out for your entertainment to decide who has the mightiest pen in town! Ridiculous challenges, unimaginable quests and unwinnable obstacles all stand between them and victory. 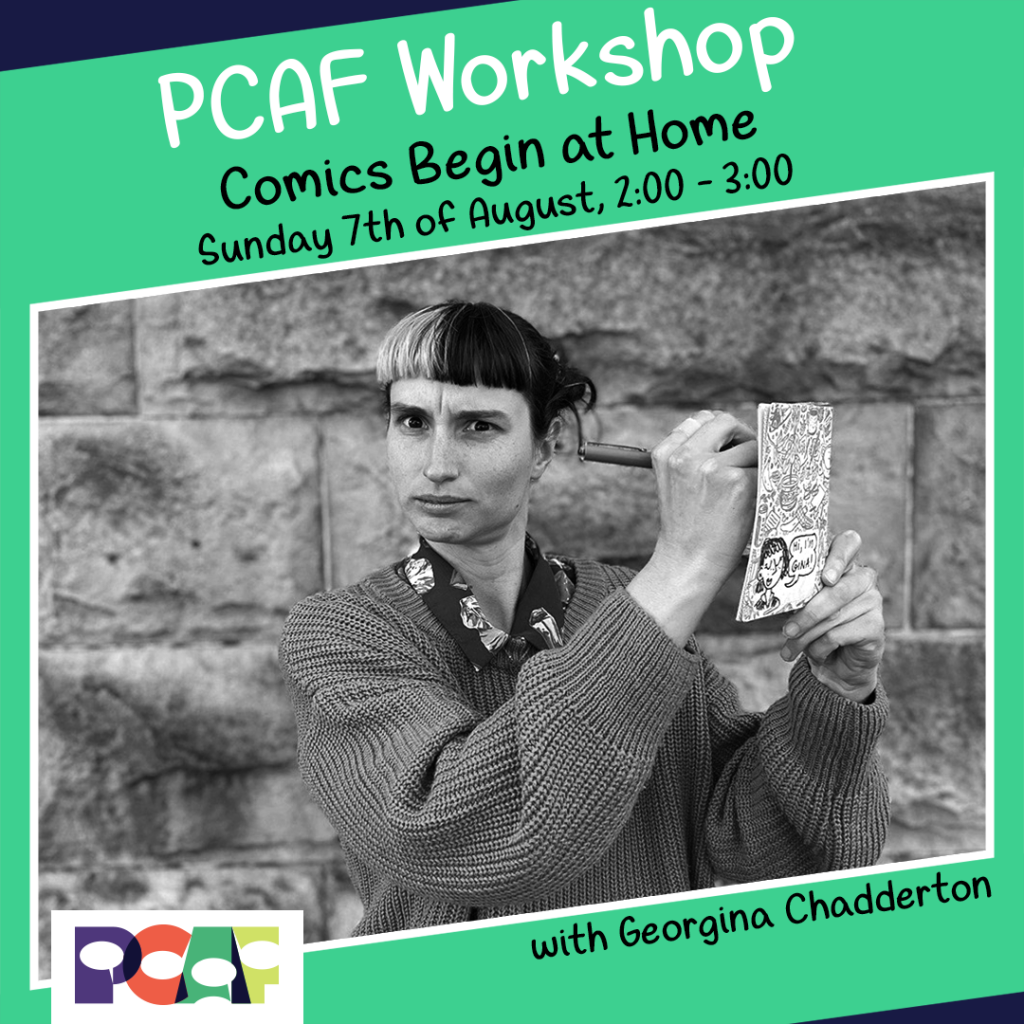 Every good comic has a heart and what better place to find that heart than at home? In this workshop we’re going to explore how you can draw inspiration from your day-to-day life in order to create spectacular stories that could only have come from YOU.

Georgina Chadderton is a freelance cartoonist, lover of dogs and plant enthusiast living on Kaurna Country (Adelaide), South Australia. She mostly draws autobio comics but also dabbles in fiction. Georgina is currently working on my debut graphic novel, Oh, Brother, a memoir about growing up with her younger brother Robert, who has autism and an intellectual disability. When not working on my own comics, she has the best job: teaching others how to make their own comics! 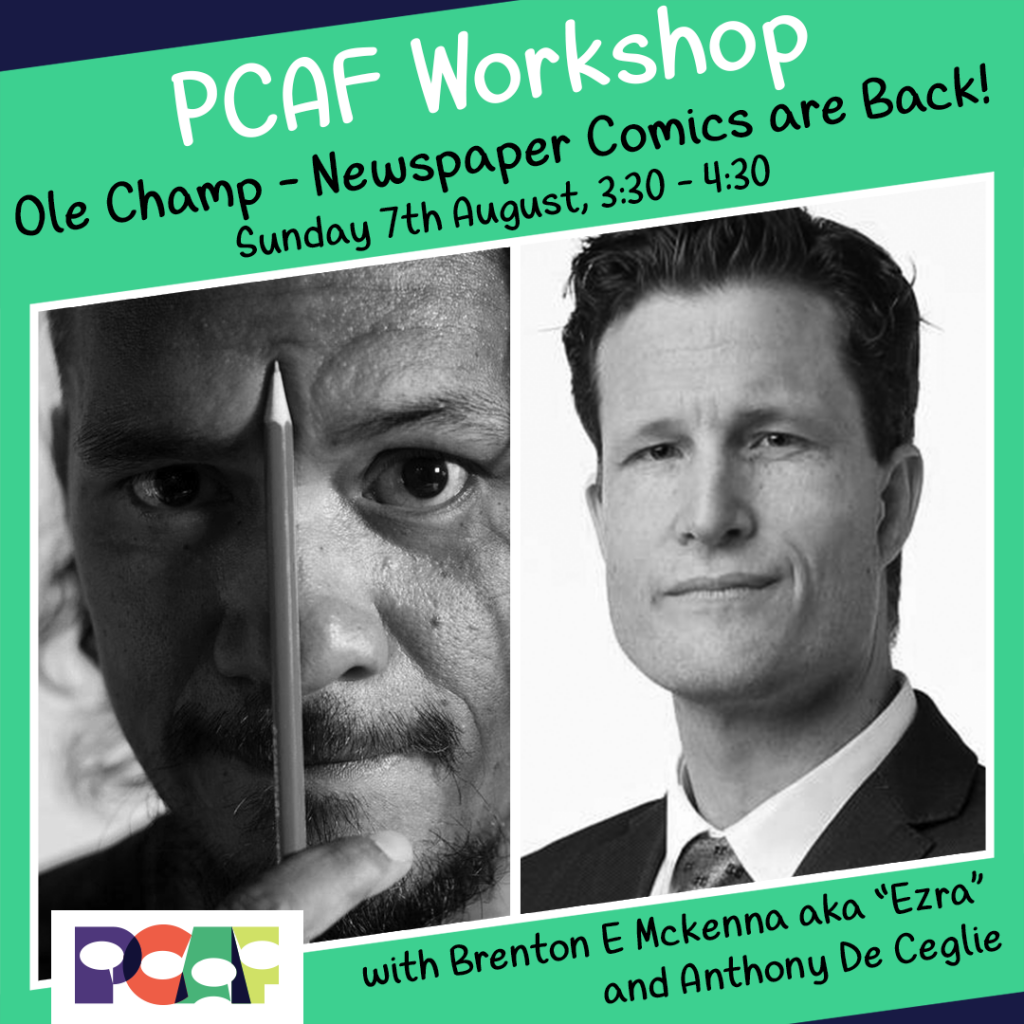 Ole Champ – Newspaper Comics are Back!

Brenton E McKenna, known by his alter ego and middle name, “Eszra” is a respected Yawuru artistbased out of Broome, WA, who found a passion for comic books in his youth. A passion which ultimately led to him to become one of the world’s most coveted First Nations Graphic Novelists with his trilogy, Ubby’s Underdogs. His newspaper series Ole Champ has been running in The West Australian for over 400 strips.

Anthony De Ceglie is the triple Walkley award-winning editor-in-chief of West Australian Newspapers, responsible for The West Australian, The Sunday Times, thewest.com.au, PerthNow and the company’s 18 regional and 11 local PerthNow newspapers. Before editing The West, he was the deputy editor of The Daily Telegraph in Sydney. Under his watch, The West Australian has become the fastest-growing cross-platform news brand in the country. A rise of more than 20 per cent in its readers in the past year alone has come on the back of eye-catching viral front pages, award-winning investigations and a push to turbo-charge The West’s online video and audio.